How NOT to Build a Boat by Jill Dickin Schinas 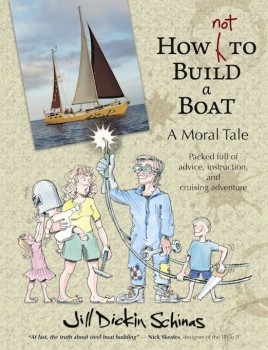 When their old GRP yacht was devastated by a Southern Ocean storm, Jill Schinas and her husband, Nick, resolved to build something stronger. Gaily – and without having researched the matter to the least degree – they threw themselves into the work of designing and constructing the ultimate, ocean-proof, eco-friendly, dream cruising yacht. On their side they had a wealth of sailing experience, which provided a perfect knowledge of what was required, but their only other weapons were irrepressible enthusiasm and the mindset which enables a man to build a radio from a potato or a mast from a lamppost.

Had this been a business enterprise no bank would ever have lent the capital, for ranged against the dreamers was a whole battery of forces any one of which would have deterred more realistic people. For a start, neither Jill or Nick had any experience with a welder – and yet they were proposing to build a steel boat. Secondly, they seemed only to have enough money to buy a couple of masts and the sails. Worst of all, they had two kids and a new baby in tow – and no one with a young family ought to attempt anything more ambitious than the washing up. Regardless of these drawbacks, Nick and Jill went ahead.
“It’ll only take a year and a half,” said he, confidently.
Fifteen years down the line, Mollymawk is afloat and the family have cruised all over the Atlantic; but the boat is still not finished.

This is the tale of what went wrong and what went right. Packed full of advice about such things as ocean-worthy design and sail plans, it will also tell you how to operate a cutting torch, how to avoid a leaky stern-gland, how to pour your own rigging sockets, how to handle a ferocious gander, how to sandblast, how to weld in mid-Atlantic, how to amuse three young children in a cabin space the size of a phone booth… and much, much more besides.

“This thing will never be more than a rusting steel can.”
— Xoë Schinas, aged 6, one year into the boatbuilding project.

“At last, the truth about steel boatbuilding.”
— Nick Skeates, designer of the Wylo II

By the author of A Family Outing in the Atlantic (the story of the family’s travels aboard their previous yacht) and Kids in the Cockpit (a guide to sailing and cruising with children).