A Gypsy Life by Clare Allcard 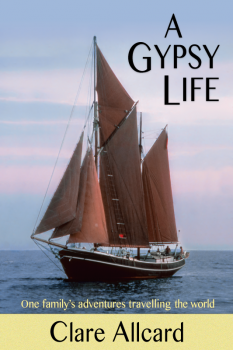 Clare Allcard and her husband, Edward, were not actually looking for a new boat…

Edward Allcard, the renowned singlehanded sailor, had already drawn up the plans and cut the timber with which to build his dream ship when, one day, he discovered that she already existed. “Quick, Clare! Come and see! There’s the most fantastic boat on the slipway…”
Thus the family became the proud owners of 69 feet of shapely but worm-riddled wood called Johanne Regina. And as soon as they could – as soon as she would float – they embarked on an extraordinary series of adventures.

Over the course of the next 12 years Clare, Edward, and their daughter Katy lived a life that armchair travellers can only dream about — one which included a lot more hard work and far more drama than any of them had anticipated.
After cruising the Caribbean, the Allcards crossed the Atlantic to Europe and tracked down Johanne’s origins in her Danish home port before setting off around the Mediterranean and through the Suez canal to the Seychelles.

On the way they were rammed and almost sunk by a 50 foot French fishing boat, raided by the Italian Mafia, attacked by the Ethiopian Navy, and fired upon, captured, and jailed for spying by the South Yemenis. Between times, in remote ports around the world, they struggled to rebuild their boat and educate their daughter.

Clare’s vivid writing provides intriguing insights into the life of a family living aboard and travelling the world. You don’t need to be a sailor to enjoy this lively and entertaining account.

A classic of cruising literature.