Against All Odds by Alan Nebauer 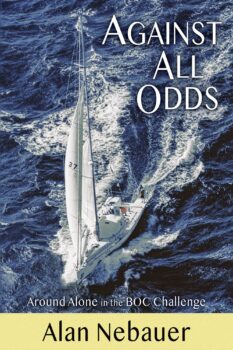 Against All Odds is the true story of Alan Nebauer’s remarkable experiences in the 1994–95 BOC Around the World Race for single-handed sailors. Sailing as a Class II competitor aboard the 50-foot (15.2 m) Newcastle Australia, Alan Nebauer had to endure incredible difficulties in a race that lasted almost eight months and covered 27,000 nautical miles.

This book recounts the author’s rescue of a fellow English competitor, his experiences of being dismasted and rounding Cape Horn with a jury rig, and the loss of his rudder north of the Falkland Islands, sailing with a steering oar to Uruguay. Beyond this, it is a testament to Alan’s extraordinary courage and determination in the face of overwhelming odds, and to his outstanding seamanship for which he deservedly won two awards.

“Australian sailors, including Don McIntyre, David Adams, and others, have stamped an incredible imprint on the rich legacy of the classic BOC Challenge single-handed yacht race around the world. None, however, have faced the daunting obstacles Alan Nebauer confronted and overcame in his remarkable Newcastle Australia campaign. His first-hand account of his star-crossed voyage is a lesson in perseverance and, ultimately, a tale of triumph.”
Herb McCormick
Executive Editor, Cruising World
BOC Media Relations Manager

“Sailing around Cape Horn under jury rig is like climbing Mount Everest in thongs. Alan’s seamanship and tenacity is tremendous.”
David Adams
Winner of Class II of the 1994–95 BOC Challenge and competitor in 1990–91
1995 Australian Yachtsman of the Year

“Alan Nebauer’s love of the sea and his determination not to be defeated by the challenges he faced in the world’s most gruelling yacht race is positively contagious. The result is a page-turning thriller that those with an ounce of salt in their veins cannot afford to miss.”
Alan Lucas
Circumnavigator and author