The Sea is So Great by Alan Nebauer 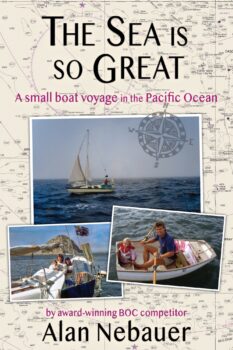 In 1987 Alan Nebauer was preparing to sail single-handed around the world in the small 25-foot yacht he had fitted out. But things didn’t turn out quite as he planned. Within weeks he was married, and instead of setting off alone, he was sailing with his new wife Cindy.

This is an account of Alan and Cindy’s early adventures at sea, getting to know each other and building a life together cruising in a small yacht almost 25,000 miles around the Pacific.
As well as illuminating the minutiae and daily challenges of life on board a small boat with almost none of the sophisticated technology available today, the story puts the reader in the middle of storms at sea; introduces the eclectic bunch of fellow travellers and characters they met along the way; paints tantalising pictures of locations they explored; and describes some of the difficulties involved in starting a family while following an adventurous roving lifestyle.

This story offers a window into a nautical lifestyle far from the tourist trail, journeying through small, remote ports and locations accessible only by boat among a close community of others living the cruising life. This inspiring record of a timeless journey will appeal to sailing and adventure enthusiasts as well as general interest travel readers.

Before Alan Nebauer was a celebrated solo ocean racer, he was a cruiser and adventurer, who with his new wife Cindy set off to cross the Pacific aboard a simple, 25-foot sloop. The Sea is so Great is the story of that voyage, and its return to Australia, and is a warm, wonderful, funny, insightful account of that amazing trip. Along the way, the Nebauers meet saints and scoundrels, are tested equally by storms and calms, and venture onward even when their pockets are empty, seemingly on their strong faith alone. Seasoned sailors and even armchair admirals will enjoy this terrific high-seas memoir of love, drama and exploration. The Sea is so Great is just one fine read.